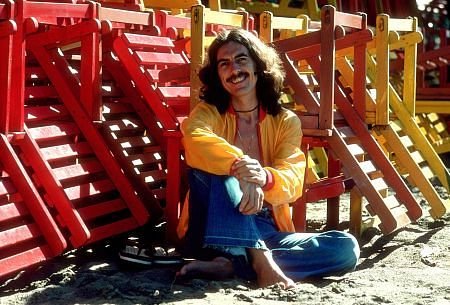 George was on vacation with Olivia in Acapulco in early 1977. George did a photo session in January of 1977. The 2 stayed at the Acapulco Princess Hotel.

From Rolling Stone, 19 April 1979
Q: “Has it [the album George Harrison] been long in the gestation stage?”
George Harrison: “Well, all of 1977 I didn’t write a song, I didn’t do anything; I was not working at all really, so I decided I’d better start doing something. I’d just turned off from the music business altogether. I am a bit out of touch with the other music. There’re certain artists that I always like to listen to, but I don’t listen a great deal to the radio. I just got out of it – I was ‘skiving,’ as the English say. Everybody else doesn’t notice, because if your past records still get played on the radio, people don’t notice that you’re not really there. But I just got sick of all that…”
Q: “Sick of all what?”
G.H.: “Just sick of the whole thing. If you look at the trade papers, everybody’s changing companies, and this artist has gone to that label and that artist to this one, and everybody’s doing this and that. [Sighing] Having been in this business now for so long – it was 1961 when we first made a record, I think, so it’s eighteen years now – the novelty’s worn off. Really, it comes down to ego. You have to have a big ego in order to keep plodding on being in the public eye. If you want to be popular and famous, you can do it; it’s dead easy if you have that ego desire. But most of my ego desires as far as being famous and successful were fulfilled a long time ago.
I still enjoy writing a tune and enjoy in a way making a record. But I hate that whole thing of when you put it out, you become a part of the overall framework of the business. And I was a bit bored with that. If I write a tune and people think it’s nice then that’s fine by me; but I hate having to compete and promote the thing. I really don’t like promotion. In the Sixties we overdosed on that, and then I consciously went out of my way at the end of the Sixties, early Seventies, to try and be a bit more obscure. What you find is that you have a hit and suddenly everybody’s knocking on your door and bugging you again. I enjoy being low profile and having a peaceful sort of life.
So anyway, to answer your original question, it got to be the end of 1977 and I thought, ‘God, I’d better do something.’”