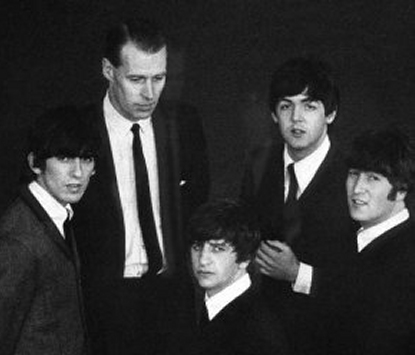 George Martin, the Beatles producer, has died at the age of 90.
Ringo Starr spread the word through a Twitter message.

Thank you for all your love and kindness George peace and love xx???????? pic.twitter.com/um2hRFB7qF

During his six-decade career in the music industry, Martin produced almost all of the Beatles’ recordings as well as many other acts.

Paul McCartney described Martin in a statement: He was a true gentleman and like a second father to me. He guided the career of The Beatles with such skill and good humour that he became a true friend to me and my family. If anyone earned the title of the fifth Beatle it was George.

Hired by the EMI division Parlophone Records in 1950, Martin initially worked on classical recordings with the London Baroque Ensemble.
By the early ’60s Martin was anxious to break into the pop market and, under the insistence of Brian Epstein, he gave a Liverpool act, the Beatles, a listen.
They worked together for almost a decade and for all Beatles’ works, except “Let It Be”.

In 1965 George Martin left EMI to form an independent company, Associated Independent Recordings but the Beatles agreed to keep working with him, on a freelance basis.

Martin said: My only regret with the Beatles is that I was wrongly advised and signed away my royalties to their records -about half a penny per title- but, with them, that would have been an enormous amount.