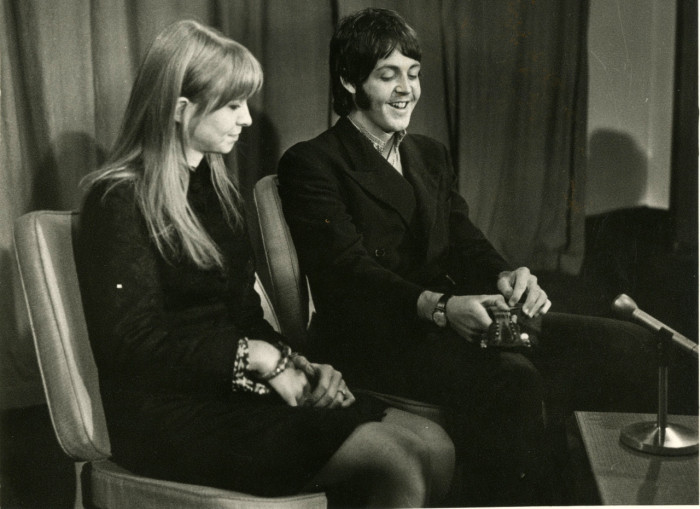 March 26, 1968 – Jane and Paul at Heathrow Airport upon their return from India.
Thanks to The Beatles Photo Vault for the scans

On March 26th 1968, Paul McCartney and then-fiancee Jane Asher were very briefly interviewed by Richard Whitmore for BBC-News as they arrived in London, returning from meditation with the Maharishi in Rishikesh, India.

Q: Well you look very happy. Do you feel better after five weeks of meditation?

Paul McCartney: Yes, yes, I feel a lot better, except for the flight, you know. That’s quite long. I’m a bit shattered, but the meditation is great!

Q: What exactly have you been doing ? How do you meditate ?

Paul McCartney: You sit down, you relax, and then you repeat a sound to yourself. It sounds daft, but it’s just a system of relaxation, and that’s all it is. There’s nothing more to it. We meditated for about five hours a day in all. Two hours in the morning and maybe three hours in the evening, and then, for the rest of the time, we slept, ate, sunbathed and had fun.

Q: We’ve heard about the extreme poverty that exists in India. Presumably you saw some of that?

Paul McCartney: Yes, oh yes. I don’t equate it, you know, because it’s nothing to do with it, you know. The idea is to stop poverty at its root. You see, if we just give handouts to people, it’ll just stop the problems for a day, or a week, you know. But, in India, there’s so many people, you really need all of America’s money to pour into India to solve it, you know. So, you’ve got to get to the cause of it and persuade all the Indians to start working and, you know, start doing things. Their religions, it’s very fatalistic, and they just sit down and think, ‘God said, this is it, so it’s too bad to do anything about it.’ The Maharishi’s trying to persuade them that they can do something about it.