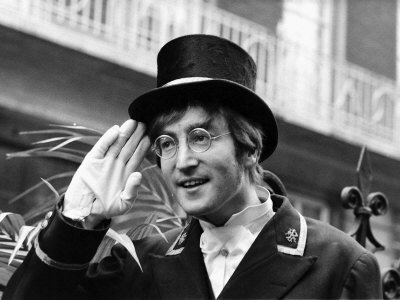 Not Only… But Also was a popular 1960s BBC British television series hosted by Dudley Moore and Peter Cook.

John Lennon appeared in a sketch in which he played Dan, the doorman of a trendy nightclub situated in an underground men’s lavatory.
John was filmed outside the entrance of the Gentlemen’s public convenience on Broadwick Street, close to the junction with Berwick Street in the Soho area of London, on a quiet Sunday morning (November 27th, 1966). The sketch was transmitted by BBC2 B&W 26/Dec/1966.

John did two more appearances during the series, on the pilot (aired 29 November 1964) and the first episode (aired 9 January 1965).