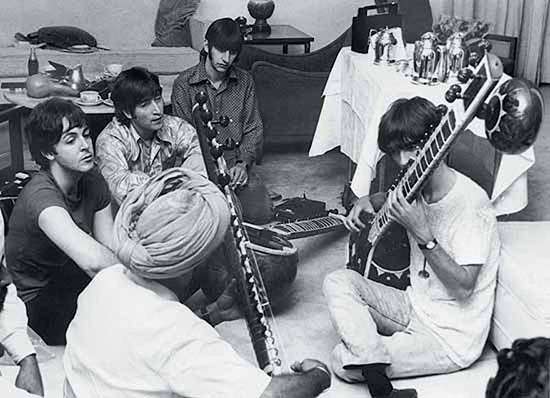 During 1966 the Beatles stopped playing live after their world tour ended in the US in August and were in the so-called ‘studio years’, recording Revolver, the single ‘Strawberry Fields Forever/Penny Lane’, and starting to work on Sgt. Pepper’s Lonely Hearts Club Band.

They just had some traumatic experiences in Japan and in Philippines, when -on their way back to England- they stopped for a day in New Delhi and did some sightseeing. Also the Beatles checked out Rikhi Ram’s old musical instruments shop and each bought Indian instruments 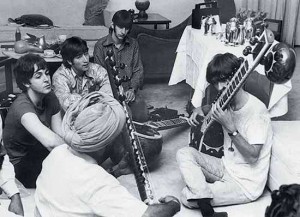 “I bought a sitar. I had a guy bring them over – again, we couldn’t really get out easily. I bought a sitar off a man called Rikhi Ram, whose shop is still there in Delhi to this day.
We got in cars and had a ride out of Delhi to see what it looked like. That was quite an eye-opener. We were in enormous old late-1950s Cadillacs, and we went to a little village and got out of the cars. We all had Nikon cameras, and that was when it first sunk into me about the poverty. There were little kids coming up to us with flies all over them and asking for money: ‘Baksheesh! Baksheesh!’ Our cameras were worth more money than the whole village would earn in a lifetime. It was a very strange feeling seeing this: Cadillacs and poverty” (George Harrison – Anthology)