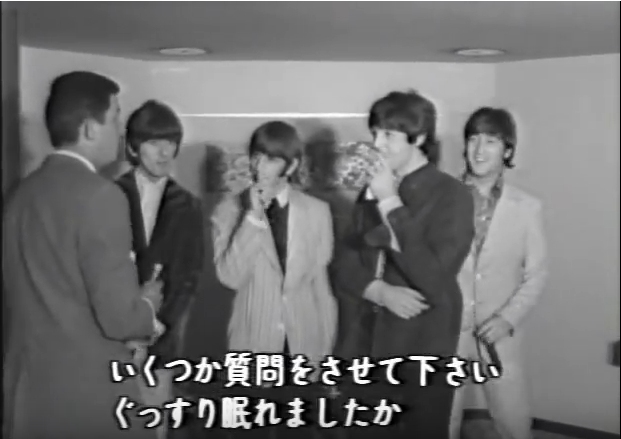 A very brief interview with the Beatles; it took place at the Hilton hotel. The interview was filmed for Japanese television and was conducted by the man who would introduce them on stage for each of their Tokyo performances.

Q: “Welcome to Japan. Well, I’ll be the MC for your show. And well, I have a few questions here. Did you have a good sleep?”

Q: “Did you have any knowledge about Japan before coming here?”

PAUL: “Yes a little bit, you know. Not much though.”

GEORGE: “About as much as we know about most places we go to.”

PAUL: “Great. Seem very great, yeah. We get lots of letters from Japan.”

Q: “You didn’t meet them at the airport?”

JOHN: “We couldn’t see a thing through the television lights.”

RINGO: “But we don’t want the security to hurt the fans, you know. Don’t get too rough with them.”

Q: “What was the impression?”

Q: “How did you feel when you received the medal?”

GEORGE: “Tired. It was early in the morning, about ten o’clock.”

Q: “What musician and composer do you respect most?”

PAUL: “These three are married.”

Q: “How many times do you wash your hair in a week?”

RINGO: “About once. It depends, you know.”

JOHN: “Depends how hot it is… how dirty it gets, you know.”