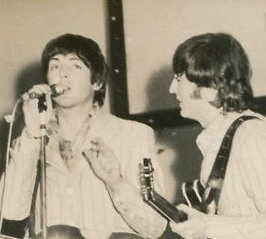 On July 4th 1966, when The Beatles toured the Philippines, they unintentionally snubbed the nation’s first lady, Imelda Marcos, who had expected the group to attend a breakfast reception at the Presidential Palace. When presented with the invitation, Brian Epstein politely declined on behalf of the group, as it had never been the group’s policy to accept such “official” invitations, but the group soon found that the Marcos regime was unaccustomed to accepting “no” for an answer.
After the snub was broadcast on Philippine television and radio, all of their police protection disappeared. The group and their entourage had to make their way to Manila airport on their own. At the airport, road manager Mal Evans was beaten and kicked, and the band members were pushed and jostled about by a hostile crowd. Once the group boarded the plane, Epstein and Evans were ordered off. Epstein was forced to give the tax authorities £6,800 worth of Philippine peso notes from the Manila shows, and had to sign the tax bond verifying the exchange before being allowed back on the plane.
Upon leaving the country, band members publicly expressed resentment at their treatment, with John Lennon saying “If we go back, it will be with an H-bomb. I won’t even fly over the place”

3 comments on “Concert in Manila (Philippines)”