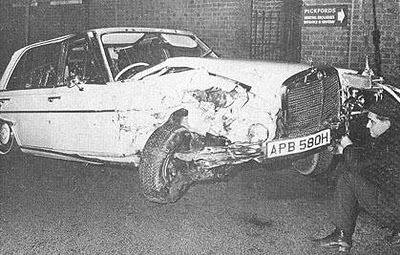 On February 28, 1972, George and Pattie got into a terrible car accident, which almost proved fatal for Pattie. She suffered a concussion and several broken ribs. She spent weeks in the hospital.

In the late evening George and Pattie left their Henley home, Friar Park, in their white Mercedes en route to London to attend a Ricky Nelson party. George’s reckless driving nearly cost them their lives. At around midnight as they approached a recently opened roundabout George collided with a lamppost on a center barrier. Pattie was knocked unconscious when her head hit the windshield and she slumped over on the gear shift lever. George, with a bleeding head wound, had to climb over Pattie to get out through her door and signal for help. George and Pattie were immediately taken by ambulance to Maidenhead Hospital where they were treated for their injuries in the casualty department. George received stitches and was discharged from the hospital. Pattie was more seriously injured with a bad concussion and broken ribs. She was transferred to the nearby Nuffield Nursing Home in Fulmer, Slough for observation.

In the morning of the following day the Nuffield Nursing Home announced that Pattie was “quite comfortable” following the car accident the night before. Pattie remained under the care of the nursing home for two weeks recuperating from her concussion and broken ribs. George returned to Friar Park after being released from the hospital and cut his hair very short after the accident since a section of hair had to be shaved for his stitches. The Harrison’s white Mercedes was a total loss.