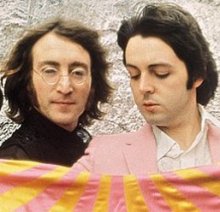 On July 28, 1968, The Beatles went out for a photo shoot with a couple of photographers –  Stephen Goldblatt  and Don McCullin to take a break from recording the White Album. It became known as the “Mad Day Out”. They went to several places in London, including Thompson House, Wapping Pier Head, St. Pancras, and Old Street Station.

2 comments on “Mad Day Out”