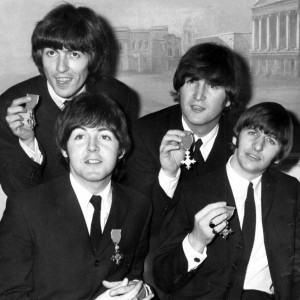 The Beatles visited Buckingham Palace to receive their MBE medals from the Queen on October 16, 1965; two years later they wore them for the album cover photograph of Sgt Pepper’s Lonely Hearts Club Band. Four years later John returned his in protest at British involvement in the Biafran war, Vietnam and “against Cold Turkey slipping down the charts.”

At a press conference at Twickenham Film Studios, Paul said that “MBE must stand for ‘Mister Brian Epstein'”.

The Beatles’ names were put forward for this honor by Harold Wilson, Prime Minister at the time. Wilson would later remember, “I saw the Beatles as having a transforming effect on the minds of youth, mostly for the good.”