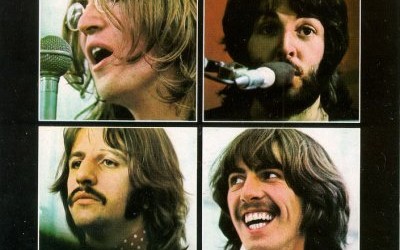 Let It Be is the 1970’s film about the Beatles in which they are rehearsing songs for the new album (initially the Get Back project, then evolved in Let It Be album) in January 1969. The film features the famous rooftop concert, their last public performance as a group.
The film had its première on Wednesday 20 May 1970 and although The Beatles didn’t attend, some figures of their world were present: Cynthia Lennon and Jane Asher, Richard Lester, Mary Hopkin, several members of The Rolling Stones and Fleetwood Mac.

A rough cut of the movie was screened for The Beatles on 20 July 1969. Director Michael Lindsay-Hogg recalled that it was about an hour longer than the released version.
All four Beatles were present, John with Yoko, Paul with Linda, George with Pattie and his parents.