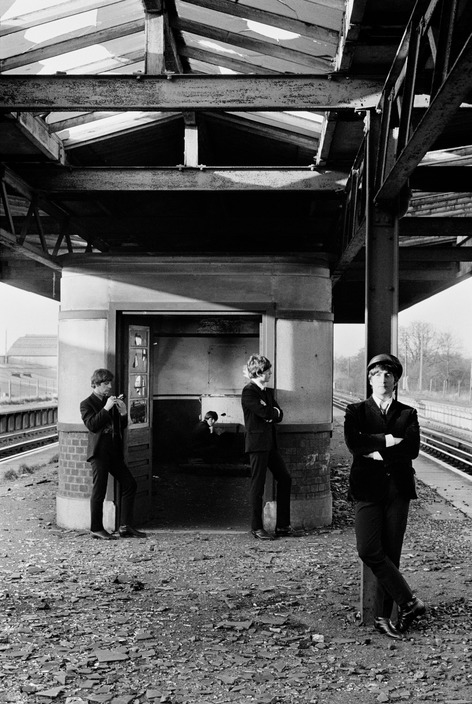 The Beatles photographed by David Hurn on train platform at Acton Station while filming A Hard Day’s Night on 5 April 1964.

David Hurn: “The disused railway station made the perfect backdrop for the movie. Although the Beatles didn’t mind posing for pictures if you asked them, they were surprisingly shy and reticent for stars. These shots behind broken glass were Dick’s way of giving the pictures a sort of enigmatic meaning. It was only Ringo who seemed to be entirely comfortable with the whole proceedings. You got the impression that Paul and John were slightly removed from Ringo and George. They definitely seemed to think they were the brains of the whole operation. But it was John who was the most intelligent and this came through in his abrasive with and eccentricities. He could be very warm but he called the shots. If he said jump that’s what you did.”

David Hurn: “I desperately needed a head shot of John so I asked him to pose when the day’s filming had ended. Even though he was very obliging and co-operative he never really grasped the fact that a photographer needs to take time to set up the shot and then take a number of shots to get the perfect result. With all of the Beatles you had to be very quick because they wouldn’t stand around waiting for you. I only had a second to get this.“

7 comments on “The Beatles by David Hurn”