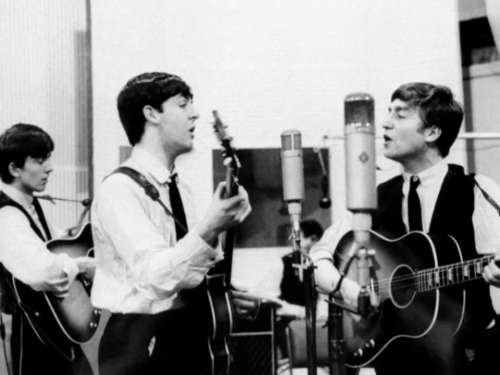 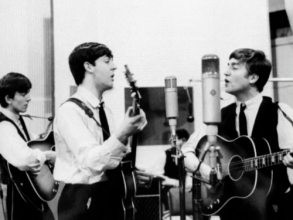 It’s the 50th anniversary of The Beatles Please Please Me album release (March 22th 1963).  The album contained the “A” and “B” sides of their first two singles, plus 10 new songs all recorded in one session at Abbey Road on Monday, February 11th 1963.

The final track of the day Twist And Shout, held back to the end because of fears that John Lennon’s already ailing voice could be wrecked if it was played any earlier, was captured in one take. Once it was recorded, the singers voice was so wrecked it was decided the record must stand.
“Trying for a second take, Lennon found he had nothing left and the session stopped there and then – but the atmosphere was still crackling,” wrote Ian MacDonald, the late chronicler of Beatles recordings. “Nothing of that intensity had ever been recorded in a British pop studio.”

“There wasn’t a lot of money at Parlophone. I was working to an annual budget of £55,000 and I could spend it however I wished, but I had to produce a certain amount of records a year. So I wanted to get The Beatles’ first album recorded in a day and released very quickly, because once we’d made the first single, my commercial mind told me that I had to have an album out very soon. So I got the boys together and asked them: ‘What have you got? What can we record quickly?’ They replied by telling me: ‘Only the stuff we can do in our act!’ I then chose the stuff that would appeal to the kids of the day, things like ‘Anna’ and ‘Chains’, and lots of rock and roll standards. We recorded ten titles in one day, starting at 10 o’clock in the morning and finishing at about 11 o’clock at night and completed the album” George Martin, All You Need Is Ears, 1979

“The first LP we did at 10 o’clock in the morning, just after a night out. We played the stage act right through, and then went home. We sat and talked about it (the recording), recorded the tracks, we went home and they just mixed it. They’d ring us in a couple of weeks, and we would say: ‘Is our record ready yet?’ It was like putting a film in the chemist” Paul McCartney